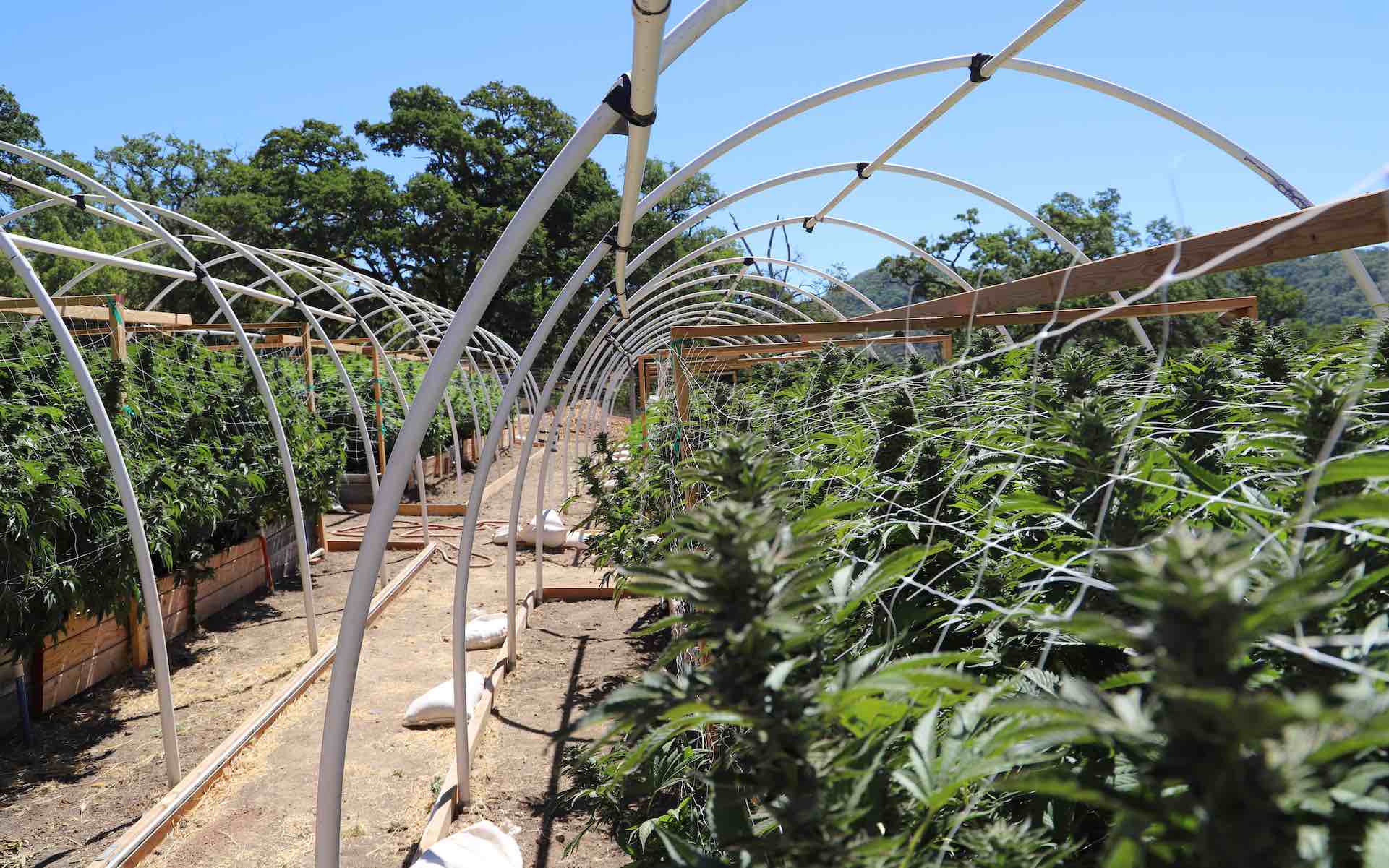 Light deprivation—or light dep—is a technique in outdoor cannabis cultivation in which growers reduce the daily amount of light plants receive, tricking the plants into thinking fall has come early. This is done with light-blocking tarps that are draped over hoop houses for 12 hours a day, triggering the flowering phase early and letting farmers harvest their buds and bring them to market several months before the big fall harvest.

In Humboldt—ground zero for craft cannabis—the technique showed up in the late 1980s and took off in the 1990s and early 2000s. The reason? Farmers realized they could squeeze out not one harvest, but two, increasing productivity and profit.

Farmers typically grow seedlings or clones under supplemental light to get a strong start, and then put them under light dep conditions to finish within two months. So long as they’ve got another batch of clones or seedlings ready to go into the ground, they can do it all again in time for fall.

Example of a light dep greenhouse from Advancing Alternatives.

It can be a game changer for a number of reasons. “It’s a great way to get some money before the typical fall harvest, so you’re not waiting so long for income,” said Rachel Turiel of Herbanology in Mendocino. About a quarter of her farmland is devoted to light dep. Her setup is nothing fancy: two hoop houses made out of PVC. The cannabis goes straight into the ground, she said.

Not only is it some early money for farmers, the price for light dep cannabis is often higher. “People will always want the freshest stuff,” said Turiel, “So if someone is still selling last fall’s harvest and you come along with light dep, you’re definitely going to get a higher price.”

A less-crowded market might not be the only reason light dep commands a better price. Jason Gellman of Ridgeline Farms in Southern Humboldt believes light dep blends the benefits of outdoor cannabis—“better terpenes and a lower carbon footprint,” he said—with what the market demands.

“People just love that indoor look,” said Gellman. “You can grow someone a big outdoor bud, and its potent, but it’s not purple or covered with powdered sugar.” Light dep cannabis gets closer to that frosty, indoor look, while still harnessing most of those sun grown qualities.

Is the quality of light dep cannabis better?

He’s not alone in that thinking. “The jury is still out on if I’m all-in on light dep,” said Johnny Casali of Southern Humboldt’s Huckleberry Hill Farms. Some of his estate cultivars, originally bred by his mother, don’t do well under light dep. “A full run takes six to eight months as compared to the two or three of light dep,” he explained. “Farmers often get smaller buds, lower THC, fewer cannabinoids, and fewer terpenes.” He theorizes that cannabis has its fullest expression of qualities when grown under the full UV spectrum the sun provides for as long as possible.

Light dep can also be hugely expensive for farmers. Unless they do their own cloning, it’s a whole lot of clones to purchase to put in the ground. Casali does all his own cloning, but if he didn’t, he estimates that each round of plants in his setup would cost $14,000. And farmers differ as to whether light dep yields more or less than a full-term run.

The process may or may not be super labor intensive. Gellman’s garden is small enough that the covering and uncovering of tarps doesn’t bother him. For Casali, the task is so big, he built a pulley system that lifts a 500-pound tarp up and over the plants. As for Turiel, it’s a lot easier when her husband—measuring 6’2” versus her 5’2”—pitches in. Otherwise, “it’s one person running back and forth to tie down sides before it flies off like a sail,” she said.

Heavy or not, it’s constant. “Every day, someone has to be home to pull tarps,” said Turiel. She considers that to be the technique’s biggest drawback. “It absolutely ties you to the land.”

While some farmers, like Casali, are wondering whether the extra labor is worth it, others are all in. Light dep allows Gellman to try out many more cultivars than he otherwise would without having to fully commit. And the experimentation doesn’t end there: This year he’s going for a third run, getting plants in by early September and seeing what he can eek out in a few months.

Turiel is also all-in: “Light dep keeps it exciting for us.”