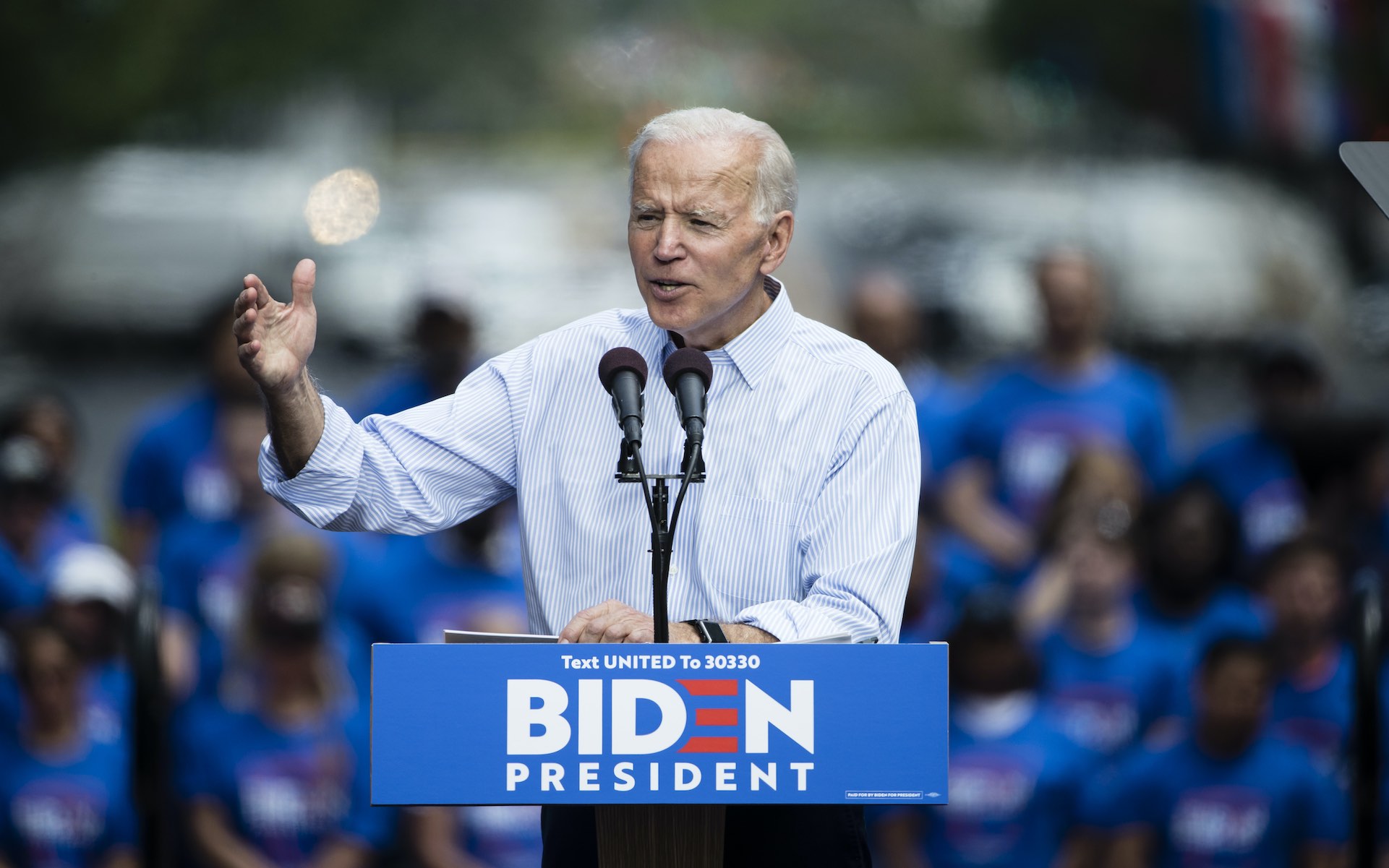 There’s still time for you to make a similar evolution, by repenting for your past sins as one of the nation’s leading drug warriors, and then quickly pivoting to embrace legalization— an incredibly popular policy (supported by 67% of all Americans) that would vastly improve the country while greatly increasing your chances of getting elected.

There’s still time for you to embrace legalization, Joe. It’s a popular policy that would improve both the nation and your chances of getting elected.

According to your policy director, the only reason you haven’t backed national cannabis legalization already is a perceived “lack of data.”

“As science ends up with more conclusive evidence regarding the impact of marijuana,” Stef Feldman recently told The Atlantic. “I think [Biden] would look at that data.”

So in that spirit, I’ve taken the liberty of compiling all the data you will need to make an informed decision regarding whether cannabis should be legal in all 50 states, or if adults should keep getting arrested and incarcerated over a beneficial plant.

Once you get a load of all this science I’m about to lay out, I’m sure you’ll change your mind.

Cannabis is a medicine that wins elections

Joe, I know you’re a busy “no malarky” kind of guy. The nation faces problems right now that might make weed legalization seem kinda trivial. But cannabis legalization is far from a trivial issue to the tens of millions of Americans who’ve been arrested for growing, sharing, or selling a plant. Or to those currently choosing to buy cannabis on the street instead of puking their way through chemotherapy, or watching their child suffer with an otherwise untreatable seizure disorder.

Also, backing legalization could be the difference between winning and losing this election. Here’s how Atlantic writer Edward-Isaac Dovere recently summarized the case:

Democratic political consultants dream of issues like marijuana legalization. Democrats are overwhelmingly in favor of it, polls show. So are independents. A majority of Republicans favor it now too… It’s popular in key presidential-election states, including Michigan, Pennsylvania, Colorado, Florida, Arizona, and Virginia. There’s no clear political downside—although marijuana legalization motivates its supporters, it doesn’t motivate its opponents.

Want to win Michigan? Legalize it

In 2018, Michigan had cannabis legalization on the ballot and as a result saw the biggest blue wave of the cycle. Just ask Michigan Gov. Gretchen Whitmer, who enthusiastically attended the state’s annual Hash Bash while on the campaign trail—and then won her race handily.

And that’s just the electoral upside of affirming legalization.

What about the potential downside of not embracing this popular policy?

What happens if your opponent outflanks you? You already know Trump will do anything, including destroying the US Postal Service, in order to avoid the humiliation of defeat. A sudden pivot to legalization would be the work of a ten-second tweet for that guy.

Legalization would protect your weak spot

Let’s be frank, Joe. We need to acknowledge that you were one of the primary architects of the modern War on Drugs. Your record—going all the way back to your first term in the Senate in 1973—does not lie.

To your credit, you’ve since apologized for playing a leading role in green lighting civil asset forfeiture, incentivizing mass incarceration, cheerleading mandatory minimums and pushing forward the militarization of the police.

But the cost of your mistakes was paid in human misery that can never be undone.

And by continuing to hold legalization at arm’s length—we all know your “decriminalization” stance is a do-nothing policy—you may pay a high political price.

What if your opponent suddenly seizes the high ground on cannabis and uses that position to attack one of your key political weaknesses? He’s already thrown a few jabs in that direction.

If you don’t act soon, your campaign could be boxed into the indefensible status quo.

The status quo, by the way, is a system in which the police will make 660,000+ cannabis arrests this year, with black people at least four times more likely than whites to be targeted.

You can’t back the status quo, Joe. Every year 660,000 Americans get arrested for cannabis. Your “decrim” plan would not stop the damage to those peoples’ lives.

I know you’ve called for federal decriminalization, Joe, but the vast majority of marijuana arrests take place at the state and local level. Which means nothing in your current criminal justice plan would significantly improve either of those horrific statistics.

I wonder if you truly comprehend the harm of those 660,000+ arrests.

Two of your own children were arrested for drugs without ever facing any real consequences. Please believe me when I say that’s not the way it works for most American families.

What the science says about legalization

Since you’re trying to determine if cannabis is safe enough to be sold legally alongside alcohol and tobacco, let’s begin by examining the relative harms of those three substances.

Annual deaths caused by each drug in the United States

That’s just one data point. But you gotta admit Joe, it’s one hell of a data point.

Three federal government reports you should know about

What if I told you a DEA administrative law judge once called cannabis “far safer than many foods we commonly consume” and “one of the safest therapeutically active substances known to man”? It’s true.

Or that a hand-picked panel of experts commissioned by no less a drug warrior than Richard Nixon spent years studying cannabis before issuing a report calling for its legalization? Also true.

Or that since 1999 the US federal government has held a patent covering “Cannabinoids as Antioxidants and Neuroprotectants?” True again.

Marijuana is not a gateway drug

The gateway theory, which launched a million falsehoods about cannabis, has been thoroughly and scientifically debunked. The supposed link between cannabis use and violence is also bullshit.

States are already ground-truthing the benefits of legalization

But don’t rely solely on authoritative studies and government patents to understand the potential effects of cannabis legalization. Those effects are no longer theoretical. We’re eight years into a mass experiment in Colorado and Washington. California has enjoyed legal cannabis since late 2016. You can ask your running mate how that’s working out.

Colorado was the first state to legalize adult-use sales (in 2014), and faced the nation’s steepest learning curve. But according to the best data available there’s been no rise in underage use in Colorado, traffic fatalities did not increase (more on cannabis and driving), violent crime didn’t rise, and opioid use fell. At the same time, taxing and licensing the cultivation and distribution of cannabis has produced billions of dollars in tax revenue.

Those results have been replicated in every legal adult-use state.

‘But some guy on Fox News said…’

Yes, you may be able to find individual studies that show cannabis has potential harms. Partly this is due to the fact that all substances, from sugar to penicillin, have potential harms if taken in the wrong dosages or methods. Other studies arise from the fact that the US government has been cooking the books on cannabis research for decades.

Entire studies and essays have been written on this subject. Long story short, the National Institute on Drug Abuse (NIDA) and the DEA collectively control the nation’s entire supply of cannabis for research studies. Together they’ve conspired to fund all manner of flawed studies seeking to exaggerate cannabis’s potential harms, while steadfastly refusing to approve studies into the plant’s benefits.

A good place to start, if you want a deeper dive on that, is a report from the Drug Policy Alliance titled The DEA: Four Decades of Impeding and Rejecting Science.”

You were hoodwinked, Joe. But it’s not too late to change

Don’t feel too bad. You’re not the only person in authority who got suckered by this decades-long anti-cannabis propaganda campaign.

I mistakenly believed the Drug Enforcement Agency listed marijuana as a Schedule I substance because of sound scientific proof… [But] they didn’t have the science to support that claim.

You can do this, Joe. Learn, grow, and lead America

In addition to announcing your support for full federal legalization in the first 100 days of your presidency, Joe, you should make an additional cannabis campaign promise.

In 1933, on the first day of legal alcohol following the repeal of Prohibition, President Franklin D. Roosevelt arranged for the Budweiser clydesdales to deliver a case of beer to the White House.

You should promise that on the first day of legal cannabis in the United States, Willie Nelson will be invited to Washington DC to smoke another joint on the roof of the White House.