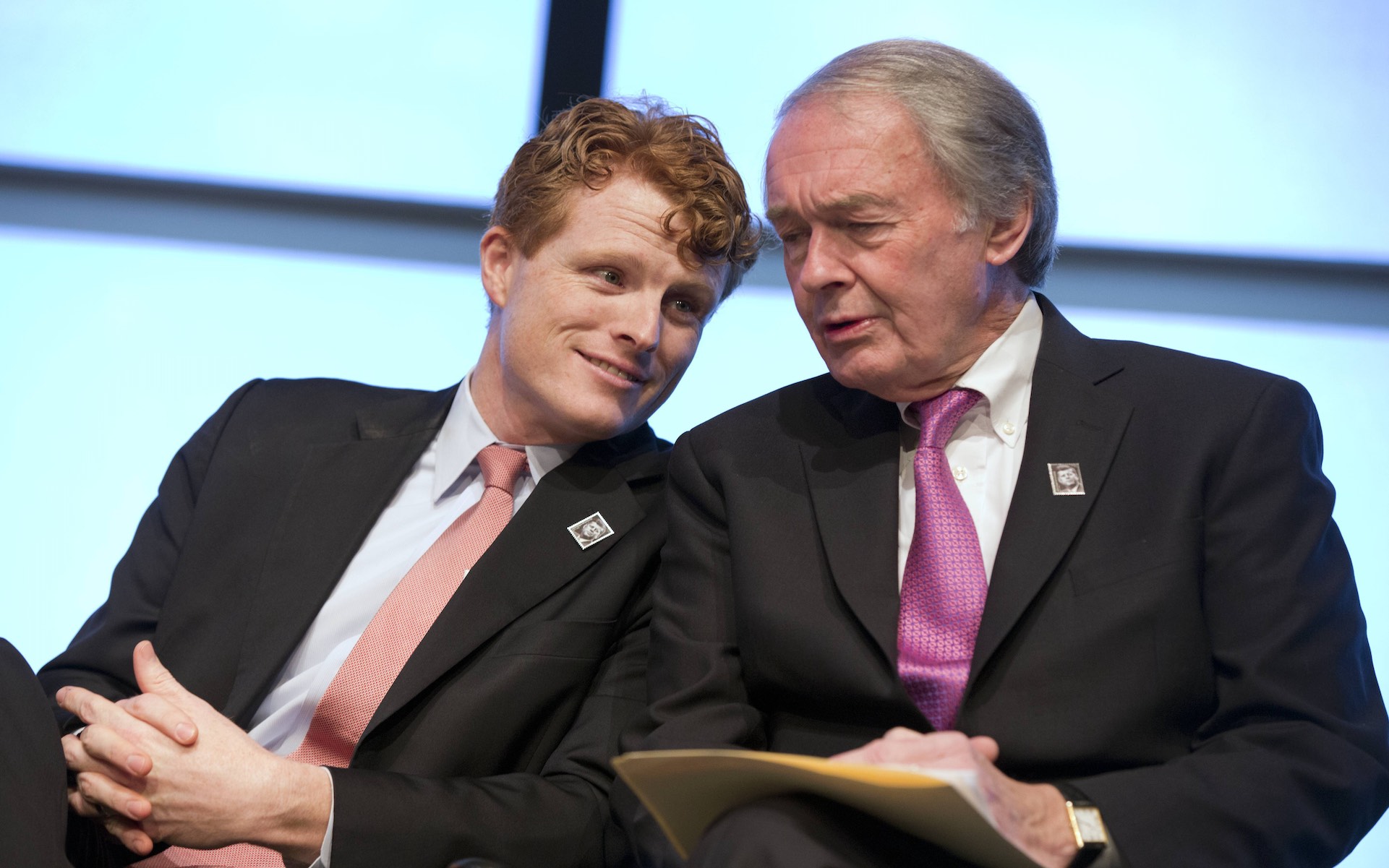 Two Democrats who have been longtime opponents of cannabis legalization are vying for a US Senate seat in Massachusetts, a state where the plant has been recreationally legal since 2016.

Rep. Joseph Kennedy III seeks to unseat incumbent Sen. Ed Markey in the Sept. 1 Democratic primary. Neither candidate has been a legalization leader—just the opposite, in fact.

Both historically embraced prohibition and stood firmly on the conservative side of drug reform legislation. That’s left them trailing the state’s voters, who enthusiastically approved medical legalization in 2012 and adult-use legalization in 2016.

Markey, a longtime Boston politician, represented the city in Congress from 1976 until 2013, when he won a special election to fill the remainder of Sen. John Kerry’s term. Kerry had resigned to become Barack Obama’s secretary of state.

Ed Markey’s been Boston’s man in Congress since 1976. Joseph Kennedy’s family is synonymous with Massachusetts liberalism. Now the two are battling over Markey’s Senate seat.

Markey won his first full term in 2014, and he now faces a formidable primary challenge from Kennedy, whose family name is practically synonymous with Democratic politics in the state.

After earning a law degree and serving in the Peace Corps, Kennedy spent his late twenties as a local prosecutor in the Cape Cod region before successfully running for Congress in late 2012. He’s retained his seat representing Massachusetts’s 4th Congressional District ever since.

The two Democrats’ lack of broad-reaching drug reform policies surfaced early in the campaign. During a June 8 debate, moderator and journalist Ted Nesi asked both about their silence on the flourishing in-state marijuana industry.

“I have supported legalization since it passed in Massachusetts,” Markey answered. “I made it public after it passed, but it was something I came out publicly in favor of before Congressman Kennedy did.”

Markey and Kennedy both cited racial injustice in marijuana-related arrests. Kennedy defended his prior opposition to recreational and medical use. “I’ve been clear about that position,” Kennedy said, in response to Nesi probing into his voting record. “I came out for the legalization of marijuana over a year ago, long before Senator Markey signed onto those bills.”

“Those bills” Kennedy referenced are three pieces of legislation that Markey recently cosigned. In January 2019, he voted in favor of the VA Medicinal Cannabis Research Act requiring the Department of Veteran Affairs to conduct research and clinical trials into the medical benefits of cannabis for veterans.

A month later, he cosigned the Marijuana Justice Act, which would remove marijuana from the Controlled Substances Act. The proposed Act would make the plant federally legal and automatically expunge the record of anyone incarcerated on use or possession charges. In addition, it would create a reinvestment fund to benefit communities most affected by prior criminal legislation.

In January 2020, Markey cosigned the Marijuana Opportunity Reinvestment and Expungement Act, or MORE Act. This Act, widely seen as the most progressive federal legalization measure, also seeks to remove the substance from the CSA, allowing states to set their own legislation.

Markey refused to openly support cannabis reform prior to 2019, but he did vote in favor of measures to protect the legal marijuana industry’s access to banking services. In May 2017, he voted for the Secure and Fair Enforcement Banking Act, or SAFE Banking Act, which would prohibit federal regulators from penalizing or interfering with banks that serve state-legal cannabis companies. In September of the same year, he supported the Carers Act to remove CBD from the legal definition of marijuana and protect anyone legally possessing and using the plant medicinally.

In 2016, Markey stayed silent on legalization

In 2016, Massachusetts added recreational legalization to the general election ballot as a referendum question. Markey never spoke out in favor or opposition of Question 4, but recently stated in the second primary debate that he voted in favor of the referendum. Since it passed, Markey has claimed to have been a vocal proponent of drug policy reform. Many legalization leaders have chastised Markey for supposedly favoring Question 4 personally, but remaining silent when it mattered.

Prior to his assumption of the Senate seat, Markey served as a representative for Massachusetts’s 7th Congressional District from 1976 to 2013. In 2005, Markey voted for the Medical Marijuana Use Amendment that protects medical marijuana users from prosecution and arrest by the Department of Justice in states where the plant is legal. Two years later, he voted in favor of a similar amendment to the Commerce, Justice, Science and Related Agencies Appropriations Act that would prohibit the Department of Justice from using funds from that act to interfere with state legislation regarding medicinal marijuana use.

Though a newer face in the congressional circuit, Kennedy has had his fair share of both opposition to and support of marijuana legislation. Kennedy signed onto the MORE Act earlier this year. In June 2019, he voted in favor of an amendment that would prohibit the Department of Justice from overstepping state recreational and medical cannabis laws.

In early 2018, Kennedy opposed legalization because it helped cops bust people. But by the end of that year he was penning op-eds embracing legalization.

In Nov. 2018, Kennedy penned an op-ed article for Stat News titled “It’s time to legalize marijuana at the federal level.” In the piece, he called for cannabis to be removed from the Controlled Substances Act, and cited the grievous harm that racial disparities in marijuana arrests does to communities of color. In the same article, Kennedy acknowledged his prior support of marijuana prohibition: “My reluctance to embrace legalization stems primarily from one place: my ongoing work with the mental health and addiction communities.”

Kennedy made his pre-op-ed reluctance clear. In March 2018, he was quoted in a Vox podcast opposing decriminalization because the odor of marijuana gave police probable cause to search vehicles, leading to more arrests. In January of that year, then-attorney general Jeff Sessions rescinded a memo allowing states to regulate their own marijuana laws without federal interference. Though he is a lawmaker in a recreationally and medically legal state, Kennedy remained silent on the action taken by Sessions.

In regard to 2016’s ballot Question 4, Kennedy sponsored a bipartisan fundraiser to block the referendum from taking effect. He raised money for Safe and Healthy Massachusetts, the state’s major anti-marijuana campaign organization. Patrick Kennedy, the former congressman and Kennedy’s first cousin once removed, co-founded and continues to lead—with Kevin Sabet—Smart Approaches to Marijuana (SAM), the nation’s most vocal anti-legalization advocacy group.

Kennedy has long been an opponent of medical cannabis use as well. In 2017, he voted against an amendment introduced by Republican Congressman Scott Perry to allow children with epilepsy access to CBD oil and therapeutic hemp.

While Markey voted for a pro-legalization amendment to the Commerce, Justice, Science, and Related Agencies Act in 2007, Kennedy opposed a similar amendment designed to protect state laws from federal supersession in 2015.

In the same year, Kennedy voted against an amendment proposed by Rep. Tom McClintock to protect state legislature over marijuana in areas within each respective state’s jurisdiction.

Three years in a row, Kennedy opposed measures that would have allowed military veterans greater access to medical marijuana. In 2014, Kennedy voted against an amendment that would allow veterans to participate in state-approved medical marijuana trials. He voted against two similar amendments in the following years, once in 2015 and again in 2016.

But Kennedy’s suddenly for psilocybin?

As the race has heated up this summer, Kennedy has scrambled to position himself as the more progressive candidate. That pivot has included a surprising new openness to drug reform policies. During a town hall event in early August, Kennedy said he’s been “diving into some of the issues around the medicinal use of certain psychedelics that, at least at this point, show some promise with regards to addressing issues in depression and particularly PTSD.”

Kennedy added a call for “more study” of medically supervised psychedelic use, but last year he voted against an amendment in Congress introduced by Rep. Alexandria Ocasio-Cortez that would have expanded research into psychedelics like psilocybin and MDMA.

A race to claim the ‘most progressive’ crown

Markey has responded by touting his progressive congressional record through viral campaign videos, one of which dubbed him the “GreenNewDealmaker.” On Twitter in particular, he detailed his history supporting Medicare for All since its introduction in 2017 and called for more action from the federal government related to COVID-19 relief.

Unlike Kennedy, Markey has not publicly taken a stance on the study or use of psychedelics in the state. This month, his Special Projects Manager Sydney Rachael Levin-Epstein posted a video on the campaign trail in Revere where a supporter smoking marijuana shouted “we’re with you” at the senator. He responded by saying “I support marijuana, by the way.”